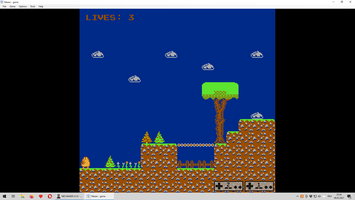 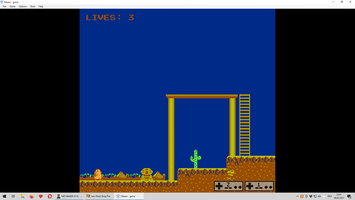 My first NES  Maker project, Mr.Potato in Potatoland, was made rather quickly, since i was able to recycle graphics from my PC version.  The new game is going to be a scrolling platformer with more levels, which means i´m going to need some more graphics than last time

So this time, for my second NES Maker project, i´m going to invest more time in graphics, level design and, well, everything else, really. I´m not much of  a programmer, so custom scripts are a bit outside of my league. But i´ll try to make the game at least look better than the first one. Which, quite frankly, shouldn´t be too difficult if i take my own game as measurement.  Two tilesets are finished for now, the Green Fields/Forest TS and the desert TS. The pictures shown are just test screens, i haven´t started level design, yet. Two of eighteen finished, quite some work  still to be done. But it´s an interesting experience working with NES and NES Maker restrictions.